At this time of year, winter tree maintenance is highly important in order to protect them against a tree disease.

In the UK, there are a range of serious tree diseases that are currently affecting species across the UK. In this article, we discuss, Acute Oak Decline (AOD) and Beefsteak Fungus, as well as an update on Ash Dieback ‘Chalara’ in the UK.

Out of all the diseases featured in this article, Acute Oak Decline is the newest. This aggressive tree disease is thought to have first occurred in Britain 30-35 years ago, and affects Britain’s native Oak species including; ‘English’ Oak (Quercus robur) and Sessile Oak (Quercus petraea).

An affected tree will have long vertical weeping lines of breakages along the trunk, that seep black fluid. Essentially, this is a sign of tissue decay and most trees tend to die in as little of four to six years after initially displaying symptoms. This particular tree disease is easily transferable and predominantly affects maturer trees aged over 50 years, however, recently it has been discovered in younger trees too.

The bleeding is typically first found 1-2 metres above the ground, and can occur way up into the trees canopy. Bleeding first appears in the spring, and may stop in the following months to allow the residue to dry and leave stains on the bark. The stains can be washed off in heavy rainfall, making it harder to identify a diseased tree.

For the infection to occur, the trees need to be predisposed to certain factors. Research has indicated a possible correlation between the Oak Jewel Beetle inhabiting the trees, and this is thought to be the way the disease spreads. These Beetles carry bacteria from Oak tree to Oak tree, causing the development of AOD. 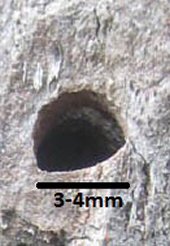 The main symptoms of AOD include:

If you believe an Oak tree on your property has contracted this infection, leave the trees in place and continue to monitor them, unless there is an immediate safety concern. If possible, corner the trees off and prevent access and contact with the bleeding. This will help with the spreading of the disease to other trees. It may be best to fell and destroy infected trees, in order to keep infection levels low. This will also reduce the risk of the tree disease spreading to healthy trees.

If you are to encounter a diseased tree, do not touch the tree and do not remove any plant material (leaves and sticks) away from the affected area. This can contribute to the spread of the infection into healthy trees.

As the name suggests, beefsteak fungus has a remarkably similar appearance to raw meat.

Initially, the fungus is whitish yellow, but as it ages, it becomes reddish or pinkish. This fungus can even give off a blood-like red juice when cut. This tree disease is highly common in the UK, and occurs low on the tree trunk more commonly on Oak and Sweet Chestnuts.

The disease can be found between July to November, and is fairly frequent in Britain each year. 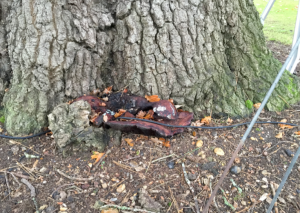 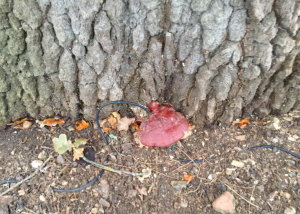 Chalara dieback is a serious tree disease affecting Ash trees and is caused by fungus, leading to leaf loss and crown dieback.

Following the discovery of the disease in the UK, the Forestry Commission have been investigating the spread of the disease. Initial research began on sites in the UK, where young infected trees were planted. As of November 2017, 155 infected sites were discovered all through the UK with a focus in the South East and East Anglia regions (15 nurseries, 55 planting sites and 85 woodland locations).

It’s not only the Ash trees within the UK that have been affected. Over the last 20 years, Chalara has hit Ash trees all over Europe, since 1992 where it is was first recorded in Poland. In Europe, Chalara has infected up to 90% of Ash trees, however, it has been recorded that certain species of Ash have shown a resistance to the disease.

Results from the 2016 Chalara Ash Dieback Survey, indicate a further spread of Chalara across Northern Ireland and to native Ash in the countryside. This was not unexpected, given the quick spread of the disease across Continental Europe and Great Britain. The first outbreak of Chalara in Northern Ireland was back in November 2012, on recently planted Ash trees. By December 2016, 176 premises with newly planted Ash and 3 nurseries confirmed the spread of the infection.

In more recent news, Ash Dieback was found on three new host species of tree in the UK in Gloucestershire. Three new tree and shrub species in the same family as Ash (Oleaceae) tested positive for Ash Dieback (Hymenoscyphus fraxineus).

Over the last five years, the Government has invested in leading technology to research an advanced understanding of the biology of this tree disease.The Forestry Commission continue their efforts to work with landowners and local councils, as well as the plant health sector internationally, to identify solutions, share experiences, and develop action plans to deal with the impacts of Ash Dieback.

How to report a sighting

Any member of the public that comes across a diseased tree (in an unshaded area) should report it by using Tree Alert on the Forestry Commission website.

If you believe a tree in your garden or on your property has been affected by any of the diseases mentioned, give us a call on 01992 475965 to see how we can help.